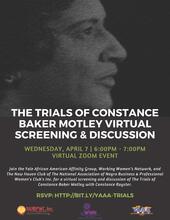 Join the Yale African American Affinity Group, Working Women’s Network, and The New Haven Club of The National Association of Negro Business & Professional Women’s Club’s Inc. for a virtual screening and discussion of The Trials of Constance Baker Motley with Constance Royster. The Trials of Constance Baker Motley is a short documentary that profiles one of the lesser-known, yet most influential players of the civil rights movement.

At the height of the civil rights movement, Constance Baker Motley joined the NAACP’s legal team. The only woman in the group, she left her husband and infant son in New York for weeks at a time to represent the NAACP in Southern courts. The first female black lawyer southern judges and juries had seen, she stunned them by winning case after case – gaining the right for black students to enter Ole Miss, The University of Georgia, and Clemson College. After the assassination of one of her closest friends (Medgar Evers), she returned to New York – and went on to become the first black woman NY State Senator, the first black woman Manhattan Borough President, and, with the backing of Lyndon Johnson, the first black woman named to a federal judgeship.

With archival footage and narration in Motley’s own voice, The Trials of Constance Baker Motley tells the story of a civil rights leader who met prejudice and danger with elegance and humor.